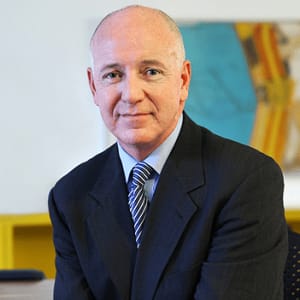 A brand strategy and marketing expert, Chris has been serving clients as an agency principal for more than 20 years for three different agencies, including his own. Chris has extensive client experience having also served as the Chief Marketing Officer for The Johns Hopkins University. The assignment at Johns Hopkins was a two-fold initiative to weave together the 11 schools and centers, including institutions as distinctive as the Peabody Conservatory and the Bloomberg School of Public Health, into one overarching brand and development campaign. Serving concurrently as the head of development communications, Chris led the effort, with the support of Peter Cohl, to develop the $6B Rising to the Challenge Campaign theme and case statement for the overarching institution.

At Cohl Group, Chris provided counsel on projects ranging from Habitat for Humanity and Muhlenberg College, to University of North Carolina-Charlotte and The Ehlers-Danlos Society,

Chris has served as the Executive Vice President and Chief Marketing Officer for the $1.5B American Legacy Foundation, developing awareness and advancement initiatives. Chris managed the brand identity and development initiatives for the U.S. Naval Institute and the American Society of Mechanical Engineers.

He has been a volunteer for the Susan G. Komen Foundation, The McKenna Center, DC; The Anacostia Waterfront Trust and many schools and other worthy causes. He was awarded an Emmy and several Effie’s for his work in tobacco control and numerous CASE awards for his work at The Johns Hopkins University, where he directed the development of the institution’s current capital campaign. Since Hopkins, Chris has developed case statements and fundraising initiatives for numerous large and small organizations, including the $650M Summit Bechtel Reserve, the National Association of REALTORS’ REALTOR University, the American College of Physicians and the Pride of Baltimore, historic sailing ship.