Syracuse University sought to strengthen its core identity while maintaining a distinctive voice for each constituent college. The small College of Engineering and Computer Science was trying to be good at everything, but was not leveraging its greatest strength—the large university with national name recognition. The College had recently added 20 faculty members, but lacked a strategic hiring plan for the next pool. The College had increased giving, but was not sure whether there was money left on the table. The College struggled with disengaged faculty. Therefore, they wanted a strategic plan that would increase faculty engagement, expand the applicant pool, increase internal visibility for engineering accomplishments, and build a stronger external reputation.

We knew that for faculty, the process is as important as the answer. They are not responsive to top-down edicts, so the call to action needed to come from them.

Thus, we created a high engagement model for attacking the college’s current problems in which the dean empowered faculty to think in interdisciplinary ways. We brought together faculty who had never worked with one another, leveraged institutional knowledge, and educated new hires. The year-long process was initiated by the dean but run by faculty, 80 percent of whom were involved throughout the process.

We used this team to help build a new narrative, positioning, and visual identity for the university. Our research showed us that there was a disconnect between the way faculty and alumni presented the university and the way the college described itself. For example, faculty were presenting the SU seal more often than the college logo, while L. C. Smith was being used to describe the college to outside audiences, causing confusion and inconsistency. We knew that a new, more consistent identity needed to be established.

The rebranding process began with immersion into the existing campus culture. We toured Syracuse and competitors (University of Rochester, Rochester Institute of Technology, Rensselaer Polytechnic Institute, Northeastern University, and Boston University), audited competitors’ communications materials, and interviewed faculty, alumni, students, parents, and staff. We found a lot to celebrate! The university was a supportive community with accessible faculty and a sense of team spirit. Additionally, the engineering school was a small college but it had the resources and opportunities of a large university as well as a multidisciplinary ethos.

We tested five potential themes for the new brand positioning: Together, More, Orange, Spirit, and Team. Through a series of online surveys, it became clear that the “Spirit to seek”, stemming from the university’s guiding principle, “Knowledge crowns those who seek her,” was the leader among these five options. Furthermore, the survey results identified the most compelling and supportive messages.

We created a visual system that celebrated the best aspects of the college and used the phrase “Spirit to seek” to better unify the students, faculty, staff, and alumni.

In September 2013, just five months after starting the process, Dean Laura Steinberg launched the full rebranding at a meeting of all College of Engineering and Computer Science faculty and staff, including the overall theme, the core narrative, the positioning, the messaging, and the visual identity system. Because faculty leadership and key influencers had been involved throughout the process, and all faculty and staff at critical points along the way, the College adopted the new positioning.

The rebranding was deployed across all admissions materials, in the alumni magazine, and on campus banners, and online communications. 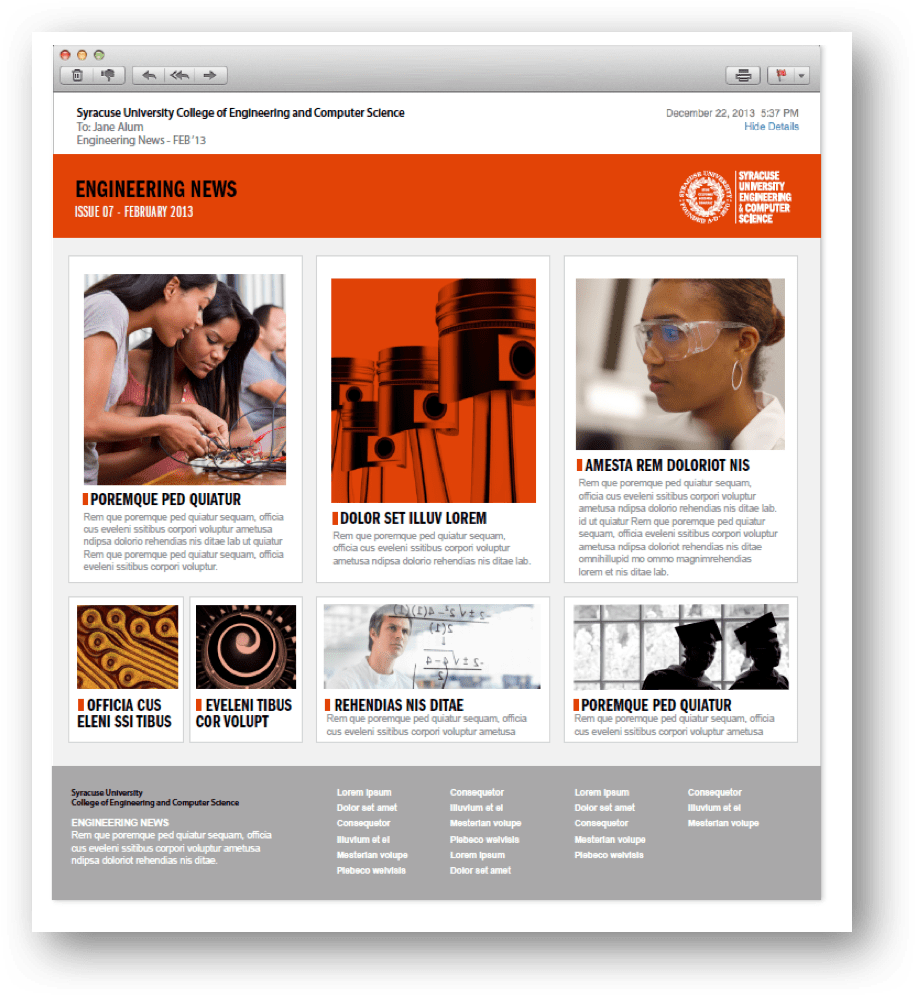