Launching a capital campaign during uncertain economic times demanded that Washington University in St. Louis connect more deeply with alumni than in years past.

This meant we had to quickly discern which elements of Washington University resonated strongest with the experiences and aspirations of its alumni—and had to develop a strategy to connect with them—with less than 90 days until the official launch of the university’s major capital campaign.

Our team members leapt to work, immersing ourselves in the life, accomplishments, and history of the university through qualitative research including discussion groups, individual interviews, and campus activities.

We called the overarching strategy, naming, targeted messaging, and communications platform for the campaign, Leading Together. and developed content for a campaign case statement and all associated collateral.

Our campaign theme, positioning, and messaging

As we researched Washington University in St. Louis’s history, we learned that it was founded in the spirit of unity in a time of great social upheaval and division. Working together at the crossroads of nineteenth century America, the founders strongly believed in nonpartisan, nonsectarian study in the advancement of the sciences, the arts, and the humanities. It is in this spirit that Washington University has grown strong.

To this day, the students, faculty, and staff feel a great propensity for collaboration. They tend to be consensus-oriented, rallying around connecting via organizational methods.

At the same time, it was also evident that the university had reached new levels of academic excellence since its last campaign. But, displaying characteristic Midwestern humility, it wasn’t showcasing these accomplishments.

The challenges of today’s world are as demanding as ever. From its campuses in St. Louis to its partnerships with 27 of the world’s great universities, the people of Washington University are steadfast in their dedication to community, collegiality, collaboration, creativity, and concern. Together, they change lives. Together, they save lives. Together, they lead—committed to the advancement of their students, scholars, and a world in need.

Our comprehensive messaging matrix articulated the campaign goals in a language designed to connect deeply with each individual constituency. From the invitations for the campaign’s opening gala, to targeted communications, our team worked diligently, and most of all collaboratively, to ensure that Leading Together would be launched on time—and that it would inspire its community to further invest in the university’s continuing success.

Leading Together exceeded its targets from the outset. Participation rates increased and the average donation size was larger than that of all previous campaigns.

“We have achieved great progress,” says Washington University Chancellor Mark S. Wrighton. “As a premier research university, we have a responsibility to anticipate the challenges of the future and prepare to meet them. This is the core of Leading Together, which has as its overarching goal ‘to enhance our leadership today to benefit America and the world tomorrow’.” 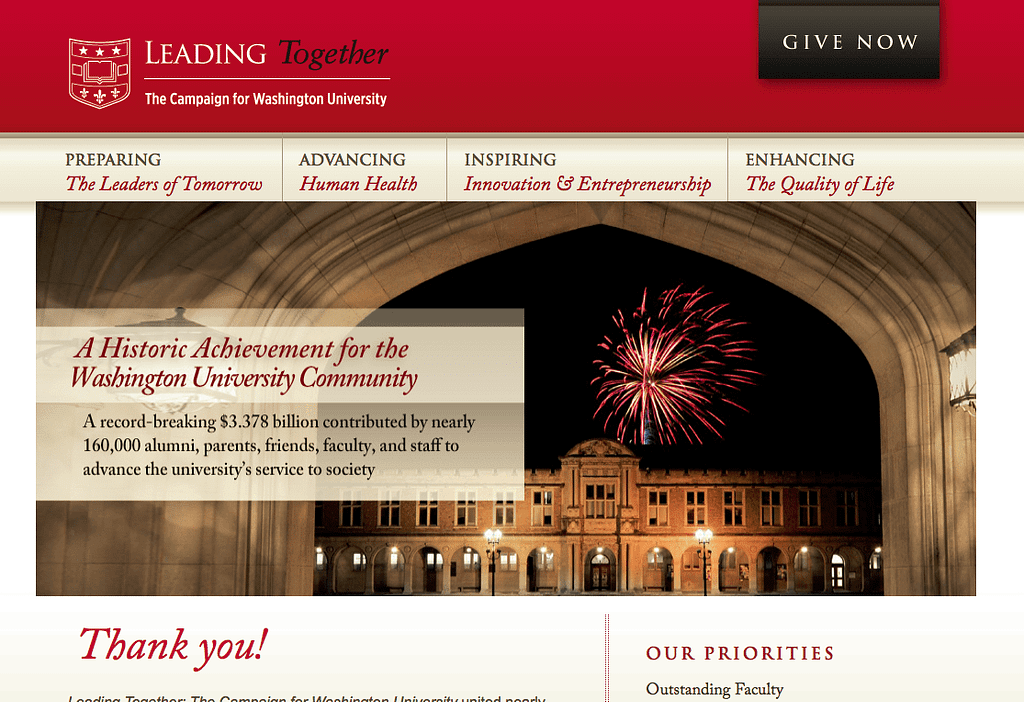